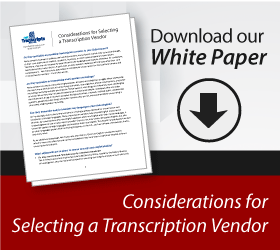 Net Transcripts provides confidential transcription and translation services to hundreds of law enforcment, criminal justice and other government agencies across the country.

We specialize in transcribing various types of recordings -- but to put it simply we transcribe conversations involving multiple speakers, dictations from a single speaker, and also transcribe and translate foreign languages. 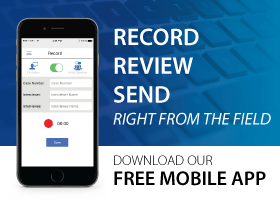 We Specialize in the Transcription of:

Speak naturally - our transcribers are people too. Unlike voice recognition software, which can be unforgiving if you misspeak or don't ennunciate clearly, our typists have been trained to follow dictated instructions and corrections.

To meet the various demands of our customers' schedules, Net Transcripts offers several cost-effective turnaround options on all multi-speaker recordings:

Multi-speaker transcripts are typed verbatim. This means we type everything that is audible in a recording, including graphic subject matter, foul language, slang, stutters and other utterances. We do not type background noises or other non-verbal sounds.

Transcripts are prepared in a 'legal format' and are returned as a fully-editable Microsoft Word document. We can also provide certified copies and accomodate most special formatting requests.

Net Transcripts accepts a wide variety of audio and video file formats, including:

Net Transcripts can transcribe most recordings, regardless of the language(s) being spoken. Our Foreign Language Transcription service option provides our customers with a transcript that is typed in the language(s) spoken during the recording.

For example, if a recording is spoken in Spanish, you will receive a transcript typed in Spanish only.

In addition to transcribing spoken foreign languages, Net Transcripts can also translate them into English. Given the exacting nature of verbatim translation, the language spoken must first be transcribed in able to produce an accurate, verbatim translation. Our Foreign Language Transcription with Translation option therefore produces a two-column document containing both languages -- the language typed as spoken, along with its translation into English.

For example, if a recording is spoken in Spanish, you will receive a transcript with the Spanish typed as spoken in the left-hand column, and its translation into English mirrored alongside in the right-hand column. We often refer to this service level as "Double-Column Translation."

To provide the best value to our customers, Net Transcripts can also Interpret a recording into English. This service option produces a document typed in English only, regardless of the language spoken. Our Direct-to-English Translation option is generally selected as a cost effective option when an agency wants a simple translation into English, generally for informational purposes. This service option does not contain a transcription of the language as spoken.

For example, if a recording is spoken in Spanish, you will receive a transcript typed in English only.

Net Transcripts can translate most documents, including hand-written notes, typed letters and public notices. We can translate a document written in a foreign language into English, and conversely, we can translate an English document into additional languages needed so your message can reach it's targeted demographic.